But, what makes a man sexy? Is it his smile, his laugh, his physique? Does he need Situation-like abs to be sexy? How important is a full head of hair to one’s overall sexiness? Can one be bald and sexy? What about confidence and sensitivity? Many women find these traits irresistible.

You may be astonished at the results of a survey taken by Synovate, a global research marketing company.

In 2008, they conducted a survey of male beauty in 12 markets across the world and found some surprising results.

The study asked men whether they consider themselves sexy. Of nearly 5,000 male respondents, less than half (49%) agreed that they are sexy.

They also asked participants to determine in which country do men think they are sexiest?

So, despite People Magazine’s conviction, where can the best-looking and sexiest men be found?

The survey queried both men and women and one country stood at least a boot’s length above the others. Let me give you a hint: They speak Italian. Is it a surprise that most surveyed agreed that the best looking men can be found in Italy? (And, probably, the best-looking women as well!)

However, out of chivalry or pride, 55% of Americans replied that the United States had the best looking men.

While men tended to think along more traditional notions of ‘sexiness,’ such has having muscles and dressing well, women cited hygiene as the top factor. According to the women surveyed, 1/3 said that good hygiene and fresh breath were a prerequisite to being considered handsome. After hygiene, women prefer men who exude confidence and who dress well, according to this survey.

But, wait… what about that full head of hair? What about George Clooney’s thick, wavy hair or Brad Pitt’s devil-may-care – I’m-a-movie-star- hair?

Isn’t that part of what makes them sexy?

Surprisingly, according to Synovate’s results, the good news for men is that only 1% of respondents said that a ‘full head of hair’ is necessary for someone to be handsome.

No mention was made about receding hairlines or bald spots or if hair loss causes lack of sex appeal.

So, remember that the next time you worry about hair loss or leaving excess hair in your comb or shower. Hair is not your defining feature and you can still be handsome and sexy without a full head of hair.

As Bob Michaels, Senior Vice President of Synovate’s Consumer Insights group, says, “In the end, men just want to be men. What that actually means changes from culture to culture, but the drive to be masculine is near universal.”

Why Virgin Coconut Oil for Hair? 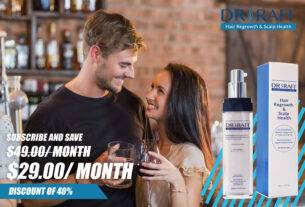 How To Recognize Signs Of New Hair Growth

Use Brahmi for Hair, And You Make The Mind Sharper As Well